Signatures of Earth's Biological Past

In the rock record, the remains of the body parts of animals such as bones, teeth, exo-skeletons and shells are preserved as fossils.

However, there is also indirect evidence of biological activity in the rock record as footprints, burrows, tracks, borings, gizzard stones and feces left behind by animals, rather than the animal itself. These signatures from the past are known as trace fossils (ichnofossils) and is evidence of the original biology and sedimentary environment in which these were made.

Trace Fossils
“ Trace fossils are typically formed when an organism moves over the surface of soft sediment and leaves an impression of its movement.”
These fossilised impressions are commonly found in shallow marine sedimentary rocks. Since trails are the imprints left by organisms over soft sediment, the sediment must either harden before anything disturbs the markings or be buried by new sediment or remain undisturbed afterwards in order for these impressions to be preserved.

Fossil Records
Much of the fossil record shows trace fossils left by a variety of vertebrates and invertebrates. Abundant fossils of true animals first appear 600 million years ago and around this time we also see the first trace fossils. These fossil imprints are indicative of biological behaviour of these early life forms (Ward & Kirschvink, 2015). Fossil footprints suggest something about the organism, for example, by examining footprints left behind by dinosaurs the size of the dinosaur can be estimated. Furthermore the distances between fossil footprints of an individual organism can also be used as an indicator of their relative speed of locomotion.
Perhaps the most famous of fossil trackways are the Laetoli footprints in Tanzania cast some 3.6 million years ago in wet volcanic ash and most likely made by a pair of Australopithecus afarensis. The entire footprint trail is almost 27 meters long and includes impressions of about 70 early human footprints (Smithsonian Institution, 2015). The footprints were preserved by subsequent layers of ash from a nearby volcano that erupted again, covering the footprints. The age of the footprints were determined by radiometric dating of the ash in which they were found. Even though we do not have the remains of the individuals who made these footprints, it was possible, from the gait, to determine that they walked upright (Figure 2). This was an important deduction because we now know that hominids were already waking upright that far into the past.

Get Inspired
If you know what to look for, trace fossils can be easily differentiated from surrounding rocks. On a recent trip to Italy near the town of San Lorenzo al Mare at a limestone outcrop, I came across a large number concentric rings and tube-like structures of about 5 to 8 cm in size. These patterns seemed too regular in form to have been made by geological processes, but rather resembled the patterns made in soft sand as modern shellfish tend to do at the water's edge (Figures 5 and 6). Poggi (2011) describes trace fossils, as I had found, in this region dating to the upper Cretaceous, i.e. about 75 million years in age. 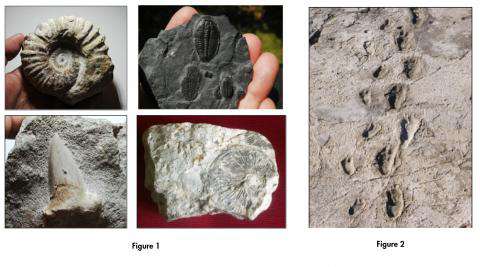