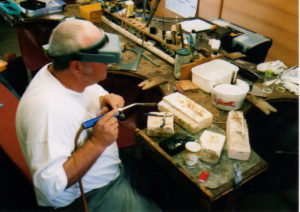 July, 1957. The only founder member, who has been a member since that date, is Dieter Schidlowski. Helmut Schönberger, another of our stalwart members, joined a few months later. Larry Bima also joined at the inaugural meeting as a teenager.

That first meeting was attended by about 25 persons, at which Dr J. de Boer was elected as Chairman, Mr T.A.P. Kruger became Secretary and the name of the Club was decided upon as “Northern Transvaal Klipspringers Club”.

Monthly meetings and outings were organised on a limited scale in the beginning years. Financial assistance was also received from the Department of Education, Arts and Science on a pound for pound basis.

The Club workshop premises moved around quite a bit. In 1958 it was in the basement of a Mrs Cooper's shop in 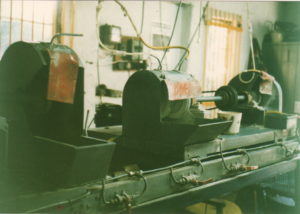 Central Street; in 1959 the diamond saw was moved to the premises of Mr W. van Beyma. In 1964 it was at 24 Devenish Street, Sunnyside; in 1965 it was at 99 Lynnwood Road. Then in 1967 we moved to the Harmony Club in Skinner Street, which for many years was the gathering place for members on a Saturday afternoon. Eventually when Skinner Street had to become a dual carriageway, we moved to temporary premises at the home of Rob de Lange in Villieria on 25th May 1991 (this was a horse stable during the Anglo-Boer War), before finally moving to our new Clubhouse in Menlo Park in 1992.​

In the early seventies, Club members took part in various International Competitions and the club also sent an exhibit to the Winnipeg International Show in Canada in 1972.

PGMC members also participated in the annual Gemini cabochon competition in Australia. Over the years, our members have done well. Paul Welman won this competition once and Helmut Schönberger has won the “Best Overseas Entry” in 1981, 1984 and 2003 (and also came second overall). Then in 2004 he won the Competition overall and was of course also Best Overseas entrant.

Local Club Shows were originally being organised by PGMC and Wits and later run in conjunction with commercial enterprises, such as at the SATU Hall, Menlyn and the Johannesburg Public Library and Cresta. All in all, the Pretoria Club has organised a total of ten Club and National Shows at the Menlyn Shopping Complex and this largely due to the help, support and encouragement of Kristi Maree. 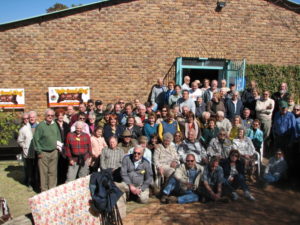 At the AGM in 1963, Dorothy Krige was elected as Secretary of the Club and she played a major role in the development of the Club over the next 15 years or so. In July 1965 she became Newsletter Editor as well and her Newsletters set a very high standard at that time. Dr John Procos was elected Chairman in 1963.

Horst Windisch became Chairman of the Club at the AGM in 1967 (after Brigadier Doug Campbell had guided the Club during the two previous years). Horst was then Chairman until 2001. Then Douw Steyn took over from Horst in 2002. He stayed on as chairman until mid year 2008. In 2006 PGMC had 400 members – the highest number ever. Willem Vorster is at present the chairman.