I am sorting stuff out, and I found my old GeoSurvey book on the Mineralogy of the Messina copper mines and a few others.

I also found my program from the September 1975 FOSAGAMS International Gem and Mineral Symposium which was held at Unisa in Proes St., and organized by Horst.

I still have the full 'kit; that we all got, Bill Larson gave a talk/slideshow on his Himalaya tourmaline mine in California where he had just discovered the the pocket of tourmaline that yielded the set of specimens including the 'Candelabra' that ended up on a set of US postage stamps too, I still remember the slide of a sign at the entrance of the mine stating that "Tourmaline is the ultimate spinach".

Professor Bariand gave us a talk/slideshow on his expedition to the Himalaya mountains in the 1950s where they rediscovered the ancient Roman lapis lazuli mines. They were the first people there between ancient times an modern, they found remains of Roman mining equipment and evidence of their tool marks everywhere in the mine.

“ The picture of interest was a picture of a lazulite crystal, self collected in its white host rock. No-one alive had ever seen that before. ”

Now they are fairly common. Prof. Bariand also gave us an illustrated talk on his stop on the way home from the Lapis mine, he, and his wife Nelly(sp) were asked by the then Shah of Persia to stop by and catalogue his treasure room, so we were treated to pictures of amazing treasures rows abd rows of full sized buckets made of pure gold filled with gemstones such as diamonds, one bucket filled with, say stones above 150 carats, the next with stone from say 100 to 150 carats and so on, the same arrangement with emeralds, rubies, sapphires, all either cut or uncut or made into or set into ornaments of pure gold. Then there were the natural pearls and, of course the famed peacock throne.

When someone asked what they did with all that stuff, he said that the Shah's kids would go in there every now and then and play with the stuff! Of course, in later years when there was the revolution and the country was renamed to Iran, all that treasure vanished somewhere somehow without a trace. That was probably the main reason for the revolution, a treasure grab, the rest of the story was probably just window dressing for the population.

I went on the Rooiberg tin mine outing with them. I met up with the late Dr. Vince Manson a few years later in Santa Monica at the Gemological Institute of America headquarters which were situated there then, he had just started up their gem testing laboratory and he gave me a tour of the place and their on campus museum. 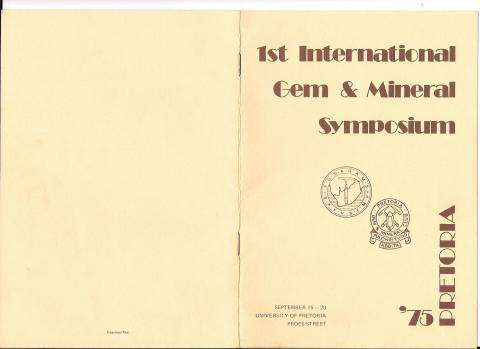